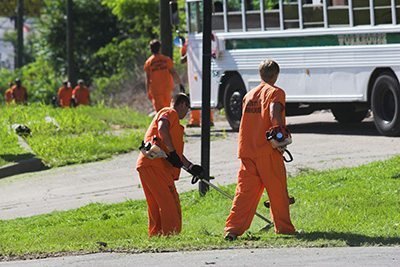 Prior to October 1, 1983 courts sentenced in accordance with the provisions of law that permitted a wide range of judicial discretion in the sentencing decision. Sanctions ranged from a fine up to state prison incarceration. The statutory maximum penalties of incarceration in state prison were:

This was a form of an indeterminate sentencing policy because most offenders sentenced to prison were by law, parole eligible. Parole was a discretionary early release policy, which obviously had a significant impact upon both the percentage, and the actual amount of time served.

The Florida Sentencing Guidelines represents the state’s structured policy with respect to the sentencing of non-capital felony offenders. There are three distinct versions of the guidelines currently in operation in Florida. They each:

Each policy is represented on its respective scoresheet, which must be completed for each felony defendant prior to sentencing.

Due to concerns regarding actual and percent of time served as well as concerns regarding a lack of uniformity in sentencing, the 1983 Florida Sentencing Guidelines were enacted October 1, 1983 and parole eligibility was abolished for almost all offenses committed after that date. These guidelines are currently in effect for all non-capital felony offenses that were committed on or after October 1, 1983 and before January 1, 1994.

The 1983 guideline structure was comprised of nine separate worksheets for specified offense categories such as murder, sexual offenses, drug offenses etc. All offenses were contained in one of these categories.

Within each worksheet, points were assessed for offenses to be sentenced and prior record offenses based on the number of offenses and each offense’s felony degree. Assessments were made for legal status and victim injury. Total scores fell into sentencing ranges or cells, for each worksheet. The least severe cell provided for a non-state prison sanction and the most severe cell provided for 27 years to life in prison. Departure sentences were permissible as long as written reasons were provided.

Several factors eventually eroded the integrity of the “truth in sentencing” aspect of the 1983 sentencing guidelines. Some of these factors included an epidemic of “crack” cocaine related offense activity, which resulted in an unanticipated impact upon correctional resources; the passage of unfunded mandatory minimum sentence legislation; and significant growth in the population of the State of Florida.

As a result of these and other factors, the percentage of time served and actual time served declined. By 1989, the average percent of time served was 34 percent. This lack of system integrity was the impetus for the creation of a new sentencing guideline structure.

The 1994 sentencing guidelines were enacted through the passage of the “Safe Streets Act.” These guidelines were created with the recognition that prison resources are finite and that the use of state incarceration should be focused upon offenders who commit serious or violent offenses, or who offend repetitively. The 1994 guidelines repealed the grant of basic gain time, evidencing the legislature’s re-commitment to “truth in sentencing”. These sentencing guidelines are in effect for all non-capital felony offenses committed on or after January 1, 1994 and before October 1, 1995.

Under the 1994 structure, the total guidelines score determines the sanction and a range of length of sanction when state prison is applicable. There are basically three categories of sanction based upon total scores. There are ranges of score which:

The court has the discretion to increase or decrease the sanction by twenty five percent. This provided for a relatively narrow range for the imposition of a guideline sentence.

The 1994 Sentencing Guidelines were significantly amended in 1995 through the passage of the Crime Control Act of 1995. The basic structure of the 1994 sentencing guidelines remained; however, point values were increased in a variety of areas and additional policy levers were created to provide for greater sanctions. The 1995 guidelines are in effect for offenses committed on or after October 1, 1995 through September 30, 1998.

The guidelines were slightly modified in both 1996 and 1997, again providing for increased sanctions and sanction length in certain instances.

The Criminal Punishment Code in Florida

The department was provided a variety of responsibilities regarding the sentencing policy with respect to the 1994 and subsequent versions of the law. Florida Statute 921 requires the department to:

The department developed a database in 1994 to be used as a mechanism to allow for the storage of completed scoresheets and allow for more accurate, legible and time efficient scoresheet preparation.

This report is derived primarily from the information upon sentencing scoresheets received by the department from the clerks of the courts and entered into SAGES.

The following should be considered when evaluating this and other information derived from this database: