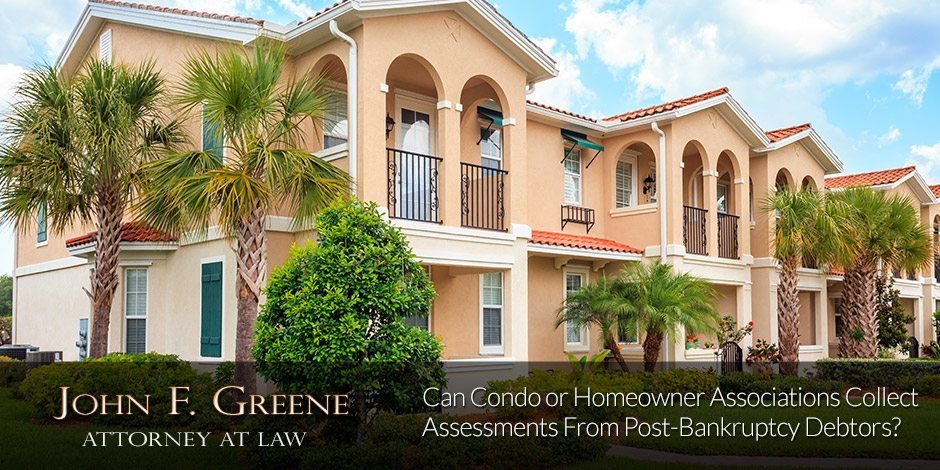 A 2016 bankruptcy case from the Southern District of Florida ought to shed light on the specifics of just such a situation after bankruptcy.

The Case of In re Ramirez

In the case of In re Ramirez, 547 B.R. 449 (Bankr. S.D. Fla. 2016), a married Florida couple were debtors who filed a Chapter 13 bankruptcy. The couple aimed to discharge their debts by arranging a partial payment plan to creditors, which was approved by the court.

Naturally, the couple received a discharge once they completed the agreed upon payments according to the terms of the plan. Post-bankruptcy, however, the couple’s condo association tried to collect post-petition assessments that began accruing after the couple petitioned and filed for bankruptcy.

In a Chapter 13, a discharge stay — also known as an automatic stay — automatically prohibits and prevents creditors from collecting on discharged debts.

The complication to the couple making such a claim in their specific case was based partially on the fact that Congress enacted a 1994 federal law — 11 U.S.C. § 523(a)(16) — that clearly states a bankruptcy discharge does not discharge condo or HOA assessments post-bankruptcy so long as the debtor continues to own said property. However, this same federal law also states that assessments that arose prior to bankruptcy are, in fact, discharged.

When weighing the evidence, facts and both previous and pending cases, the U.S. Bankruptcy Court in the Southern District of Florida found that the owner’s personal liability for a condo association or HOA’s post-petition assessments were extinguished by a bankruptcy discharge under Chapter 13.

While this portion of the court’s ruling ended up in the couple’s favor, the court also noted that the lien for assessments survived the couple’s bankruptcy discharge, which allowed the condo association to foreclose on the lien and enforce the assessment, even post-bankruptcy.

Practically speaking, this ruling simply means that the money judgment granted to the condo association was set aside, which protected the couple from personal liability. At the same time, the court did not hold the association in contempt because the Courts of Appeal had yet to decide whether the personal obligation is discharged post-bankruptcy.

As these Chapter 13 complexities continue to evolve, it is important to choose a reliable bankruptcy attorney who can help you navigate these laws and court decisions.

John F. Greene is a bankruptcy lawyer who helps Destin debtors in need of bankruptcy relief. From his Destin office, he also represents individuals in need of legal counsel for a bankruptcy throughout Northwest Florida and the Emerald Coast, including Santa Rosa, Walton, Bay and Okaloosa Counties. Additionally, discuss your bankruptcy with John if you live in the communities of Destin, Niceville, Fort Walton Beach, Panama City and Santa Rosa Beach.

If you need a Florida bankruptcy lawyer to navigate post-bankruptcy assessments or any other bankruptcy issue, contact attorney John F. Greene or call 850-424-6833.