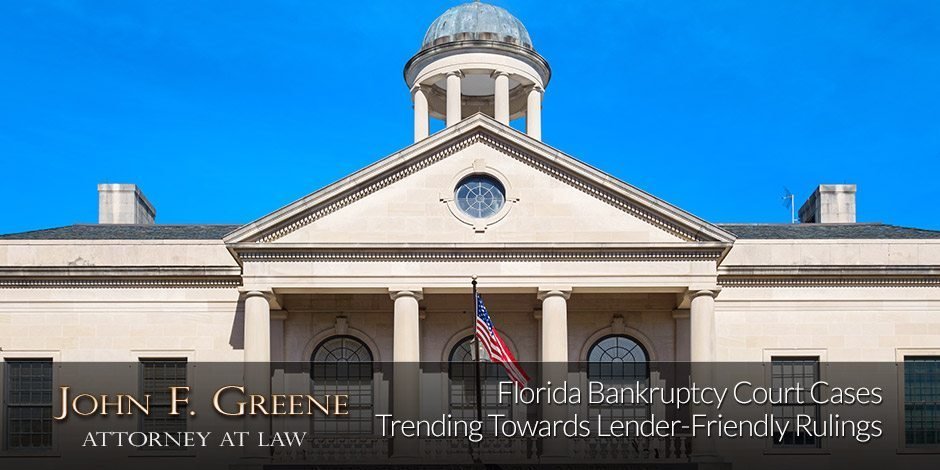 Following bankruptcy cases and legal developments is an important way to determine the outcome of future cases in Florida. In legal language, the term for previous court cases affecting future rulings is known as “precedent.”

While courts are not required to use the reasoning of prior court cases to rule on the current case, courts frequently choose to do so. As such, it is important to focus on recent cases and the possible legal trends that may arise from these cases.

Recent bankruptcy cases, for example, indicate a trend toward more lender-friendly rulings in the state of Florida. Here are two prominent examples of bankruptcy cases that serve as evidence of Florida courts moving in a pro-lender direction.

This case gives lenders a reason to take another look at their loan documents. Mainly, lenders will likely be focusing on whether their non-waiver and acceleration provisions address the matter of de-acceleration. The Third District Court of Appeals held that when a foreclosure is dismissed with or without prejudice, parties are put back into their position that existed before the dismissed action’s filing. As a result, this would leave a lender free to accelerate and then foreclose on subsequent defaults in a bankruptcy proceeding.

However, this opinion was limited to analysis when there is a reliance on loan document texts. Loans with different language could still result in a lender’s claim being time-barred. Going forward, it would not be a shock to see lenders mimic the language of the loan documents, in this case, to give themselves a legal advantage in the event of bankruptcy.

The takeaway from this case is that if a lender files a second foreclosure action, the basis of the default needs to have accrued within the past five years to avoid the time-bar that results from Florida’s statute of limitations.

High-profile cases like Beauvais and Collazo indicate a push toward pro-lender rulings. If this trend bears out, in reality, Floridians will need a trusted Florida bankruptcy lawyer now more than ever.

John F. Greene is a trusted Destin bankruptcy lawyer who helps Floridians through every stage of bankruptcy. From his Destin office, John represents bankruptcy clients throughout the Emerald Coast and Northwest Florida, including Okaloosa, Santa Rosa, Bay, and Walton Counties. He also serves clients in need of legal counsel for their bankruptcy in the Destin, Santa Rosa Beach, Fort Walton Beach, Niceville and Panama City communities.