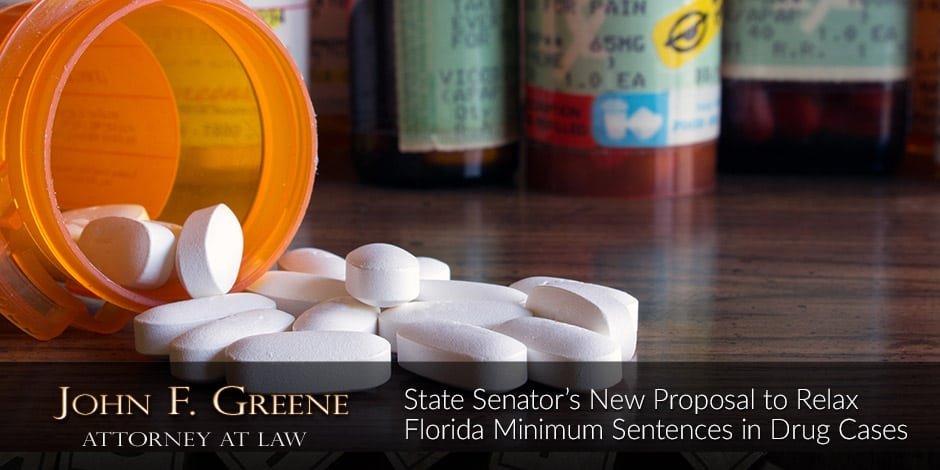 For many years, the state of Florida has been fighting a war on drugs, especially against addictive painkillers such as hydrocodone and oxycodone. In the early 2000s, at the height of the pill-mill trade, the prevalence of these drugs caused state lawmakers to respond with harsh drug trafficking laws.

In fact, Florida state laws are currently as tough on drug addicts as they are on traffickers. For example, simply possessing 14-28 grams of hydrocodone (anywhere between 22-44 pills) will land you a mandatory minimum sentence of 3 years. It is these mandatory minimums that have led to the need for a new proposal seeking to relax Florida minimum sentences in drug cases.

A new proposal presented by Tampa Bay Senator Jeff Brandes aims to give more power to judges so they can use their discretion to waive minimum mandatory sentences and to charge drug offenders more appropriately.

The current drug trafficking laws in Florida are as strict as they come. Drug-related offenses are at the top of the list in the state, followed by other offenses such as burglary, murder, and robbery. These tough laws were enacted in response to the drug epidemics of the 1970s- 1980s. Indeed, it is the narrative of kilograms of cocaine stashed in boats and hotel rooms that drove the need for hefty sentences when it came to prescription pills.

The current law, under Statute 893.135, defines the act of trafficking as purchasing, manufacturing, delivering, selling, or bringing in any controlled substance into the state. Trafficking also involves simple possession of controlled substances such as opioids. With this description, simple possession of a certain amount of these drugs can land you with a first-degree felony trafficking charge.

The primary purpose of reforming mandatory minimums is to allow judges more discretion in sentencing drug offenders to punishments that fit the crime. In this way, first-time offenders, non-violent drug addicts, and people with no criminal record can receive appropriate sentences. Brandes’ proposal seeks to give judges the power to waive mandatory minimum sentences (in certain situations) even without the approval of a prosecutor.

Here are specific scenarios that the proposal seeks to address:

By addressing these specific scenarios, decisions made with regards to drug trafficking violations will become more objective and more suitable to the actual offense. The proposal will also reduce the frequency of cases where some first-time offenders caught with prescription pills would receive mandatory jail time.

This new proposal will also make it easier for drug addicts to receive appropriate help as opposed to jail time, and for veterans dealing with PTSD and other conditions to receive much-needed assistance.

Indeed, in light of the current minimum sentences, prosecutors often struggle to find what would be an appropriate punishment that is outside of the 3 years minimum jail time. And because drug offenses constitute 15% of all inmate offenses in prison, this proposal seeks to cut prison costs by $47 million in 5 years by reducing the number of inmates locked up for minor crimes.

If you’ve been convicted of a drug offense in Florida, or are seeking more information regarding current drug laws, attorney John F. Greene can help. As a drug defense attorney serving the counties of Walton, Bay, Okaloosa, and Santa Rosa, John has the experience and expertise to represent your interests and to mount a successful defense. Contact Attorney Greene by calling (850) 424-6833 or scheduling a consultation through this website.